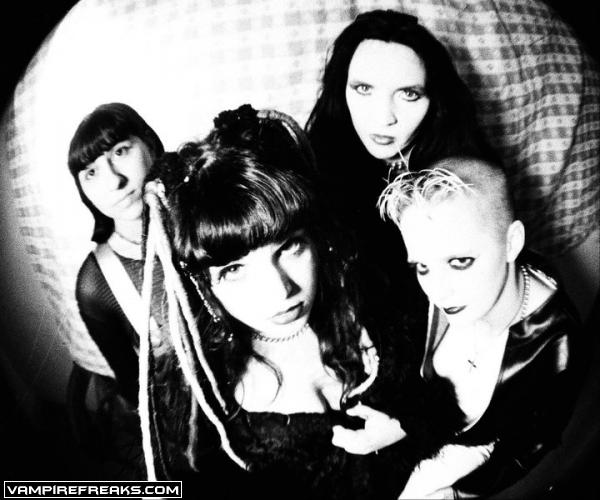 This is going to be a tough one.

There’s no point talking about how it felt to see Jack off Jill live without a little context, which is why I am hesitantly going to discuss my least favourite subject…me (at least in regards to this band).

I was eleven when Jack off Jill broke up, and I became a fan a year or two later. I never knew much about them, other than that I was madly in love with Jessicka and they were contemporaries of another act I adored as a teenager, Marilyn Manson. I can remember long car journeys with my family that were filled with listening to Clear Hearts, Grey Flowers over and over again on my CD Walkman.

To this angsty, goth teenager they were a soothing balm, as strange as that might sound if you know of them. So many of their songs expressed what I felt as a teenager; anger, despair, self-loathing, and while it might not sound healthy or useful to someone else, it was right for me. As I got older, the songs made progressively more sense to me, not less. Even when I went long periods of time without listening to them I could still sing (or shout) along, and the words still meant as much.

I don’t think there’s been a time in the last ten years when Jack off Jill haven’t been important to me. Three years ago on Valentine’s I made a video to My Cat with photos of my actual cat; Surgery became more literally relevant when I was nineteen and going under the knife; and the rest of Clear Hearts is the soundtrack to my teenage years.

So as you might imagine, I entirely freaked out when I found out that, fifteen years after their split, my beloved Jack off Jill were reuniting for a tour. There wasn’t a chance I could say no to this opportunity and I hurriedly snatched up tickets for the last night of the tour in Heaven, London.

To say I was excited would be an understatement. I mean, this was Jack off Jill, guys! Jessicka Addams nee Fodera, the personification of my teenage angst and long-time style inspiration, was going to be in the same room as me and a bunch of other screaming fans!

It would be unfair of me to leave the support acts out of this, but I’ll be brief. The two piece American girl duo that started the night, The Regrettes, were awesomely punk and bratty – they did an incredible job of rocking really hard considering there was only two of them. The Ethical Debating Society kept the energy levels up with a post-riot grrrl rock-out, reminding me in attitude and style of another of my favourite bands in my teenage years, Help She Can’t Swim. Both of these acts did an incredible job of building the riot grrrl atmosphere, and it almost felt like a gig in the heyday of the movement – when girls were called to the front and uninhibited frontwomen dominated the stage. It was an incredible experience to be part of.

Gigs are hard to analyse, and hard to explain, as so much of it is caught up in the intangible nature of actually being there; bathing in the powerful glow of this strong, talented artist and feeling the ache in your neck from head-banging too hard. I was never going to be displeased with the setlist; the benefit of a band that has only released two and a half albums is that every song is golden, and we all screamed with joyous recognition to each one. Jessicka threw chocolate coins to the audience from her concealed granny pants, and had a bucket of “blood” ceremoniously poured over her during the encore. It was beautiful. She even made a passing reference to her contentious falling out with Marilyn Manson in the introduction to Author Unknown.

There was one particular aspect of that show, however, that really made me feel like I had to write about it. And that is, Jessicka’s real-time morbidity, which went beyond the humour of their shows and made everything more real.

There was a lot of talk about this being the band’s last show, for good – which isn’t entirely surprising, considering there was no promise of getting back together. Throughout the show, which was on her 40th birthday, Jessicka talked a lot about feeling as though she was in an older body. She told us her hair was thinning, and she was sick of it which lead to her hacking away chunks in front of us all. At one point she pulled a razor blade out and cut her forehead open, rubbing blood all over her face.

Twenty years ago, that wouldn’t have been unusual. Self-harming on stage was a fairly common occurrence for some goth bands in the nineties – think Till Lindemann making his head bleed with the blunt force of his microphone in Live Aus Berlin, or Marilyn Manson’s repeated on-stage cutting. But it’s virtually never seen these days, and while I obviously don’t condone self harming in any way, it made the show feel truly, viscerally goth, and was about as close to being taken back to a metal gig in the nineties as possible.

It wasn’t until after the show that I put it all together. They had to cut the tour short because she’s sick…her hair is thinning…her body feels old… What I had taken as a normal gothic preoccupation with death and a morbid sense of humour about mortality might have been more personal than I thought. Later snooping revealed that her illness is a result of a gastrointestinal bacteria causing her intestine to rupture, and that she’s been in recovery ever since her life-saving surgery in 2013. Hopefully with time she’ll be ready to embark on the mammoth journey that is touring the US.

That was a night I never thought I’d have. Not just because of who the band was and what they meant to me, but because I was – and still am – so blown away by the passion and intensity of the performance. Seeing an act like that in a venue so small was emotionally exhausting and utterly brilliant; exhilarating and deflating at the same time. Even weeks later I felt morbidity hanging over me like a shadow.

So thank you, Jack off Jill. You gave me an experience I hope I’ll always remember, and I don’t know if I’ll be the same again.

Only time will tell if that’s a good thing.